Being Honest With Yourself

The person we long to be is not necessarily the person we’re meant to be.  Many people pursue ideals that don’t represent their true strengths and how they can best succeed.  They develop a picture of who they *should* be and work harder and harder at climbing that ladder, only to eventually find it’s leading against the wrong wall.

*  The hedge fund accumulates more and more capital and expands into an increasing number of liquid strategies and markets, only to lose its edge and and performance;

*  Money managers expand their teams again and again, only to find that they are much better at managing portfolios than managing people;

*  A trader works harder and harder at perfecting their “setups”, only to find that they are locked into patterns that don’t work in new market conditions;

*  Traders spend more and more time on their performance, only to find that their self-absorption creates dead-ends in their relationships.

Here is my fable, based on the recent post:

The important reality is that there are two forms of growth.  One type of growth is improving who you are and what you do.  The second type of growth is transforming who you are and what you do.  Look at Apple; look at Amazon; look at McDonalds.  All are very different companies from when they began.  Year over year, they became better versions of themselves, but periodically they became different versions of themselves.

Many, many performers hit dead ends because they keep trying to become better caterpillars and never evolve and transform.

The hard part is being honest with ourselves and recognizing when it’s time to get better at the game we’re playing and when it’s time to play a different game.  It’s not easy to let go of the past and begin an uncertain future.  If we never enter our chrysalis, however, we will never take flight.

Be Your Best Self Protect Your Portfolio During an Economic Downturn: Strategies 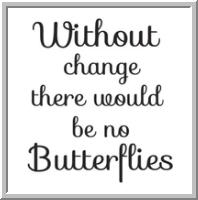 How To Start Your New Year