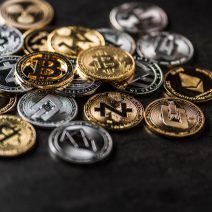 Cryptocurrencies have become increasingly popular over the past several years – as of 2018, there were more than 1,600 of them! And the number is constantly growing. With that has come to an increase in demand for developers of the blockchain (the underlying technology of cryptocurrencies such as bitcoin). The salaries blockchain developers earn show how much they are valued: According to Indeed, the average salary of a full-stack developer is more than $112,000. There’s even a dedicated website for cryptocurrency jobs.

A Brief History of Cryptocurrency

In the caveman era, people used the barter system, in which goods and services are exchanged among two or more people. For instance, someone might exchange seven apples for seven oranges. The barter system fell out of popular use because it had some glaring flaws:

After people realized the barter system didn’t work very well, the currency went through a few iterations: In 110 B.C., an official currency was minted; in A.D. 1250, gold-plated florins were introduced and used across Europe; and from 1600 to 1900, the paper currency gained widespread popularity and ended up being used around the world. This is how modern currency as we know it came into existence.

Modern currency includes paper currency, coins, credit cards, and digital wallets—for example, Apple Pay, Amazon Pay, Paytm, PayPal, and so on. All of it is controlled by banks and governments, meaning that there is a centralized regulatory authority that limits how paper currency and credit cards work.

Imagine a scenario in which you want to repay a friend who bought you lunch, by sending money online to his or her account. There are several ways in which this could go wrong, including:

There is a central point of failure: the bank.

This is why the future of currency lies with cryptocurrency. Now imagine a similar transaction between two people using the bitcoin app. A notification appears asking whether the person is sure he or she is ready to transfer bitcoins. If yes, processing takes place: The system authenticates the user’s identity, checks whether the user has the required balance to make that transaction, and so on. After that, the payment is transferred and the money lands in the receiver’s account. All of this happens in a matter of minutes.

Cryptocurrency, then, removes all the problems of modern banking: There are no limits to the funds you can transfer, your accounts cannot be hacked, and there is no central point of failure. As mentioned above, as of 2018 there are more than 1,600 cryptocurrencies available; some popular ones are Bitcoin, Litecoin, Ethereum, and Zcash. And a new cryptocurrency crops up every single day. Considering how much growth they’re experiencing at the moment, there’s a good chance that there are plenty more to come!

But, let’s define what cryptocurrency is.

A cryptocurrency is a coded string of data representing a currency unit. Peer-to-peer networks called blockchains monitor and organize cryptocurrency transactions, such as buying, selling, and transferring, and also serve as secure ledgers of transactions. By utilizing encryption technology, cryptocurrencies can serve as both a currency and an accounting system.

A cryptocurrency is a digital or virtual currency that is meant to be a medium of exchange. It is quite similar to real-world currency, except it does not have any physical embodiment, and it uses cryptography to work.

Because cryptocurrencies operate independently and in a decentralized manner, without a bank or a central authority, new units can be added only after certain conditions are met. For example, with Bitcoin, only after a block has been added to the blockchain will the miner be rewarded with bitcoins, and this is the only way new bitcoins can be generated. The limit for bitcoins is 21 million; after this, no more bitcoins will be produced. 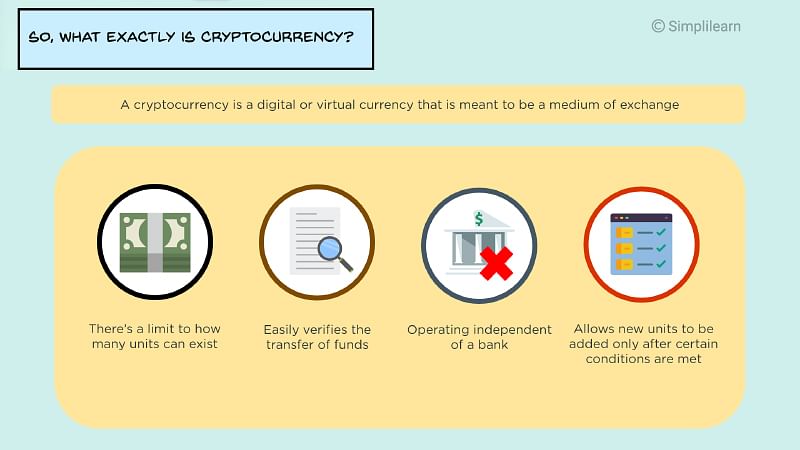 With cryptocurrency, the transaction cost is low to nothing at all—unlike, for example, the fee for transferring money from a digital wallet to a bank account. You can make transactions at any time of the day or night, and there are no limits on purchases and withdrawals. And anyone is free to use cryptocurrency, unlike setting up a bank account, which requires documentation and other paperwork. 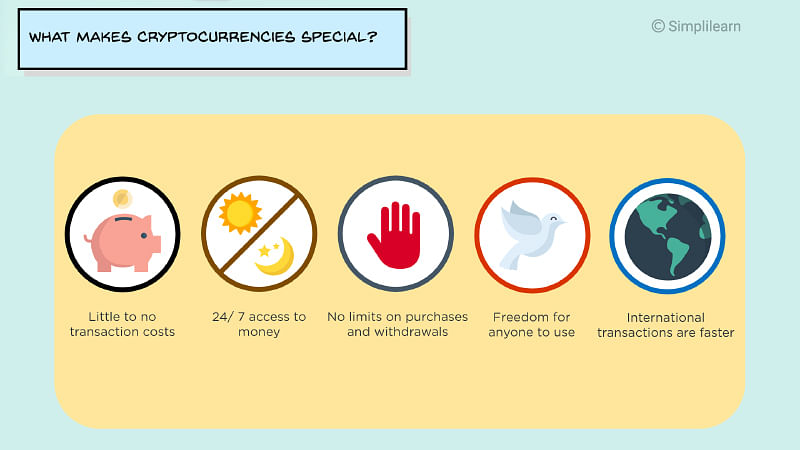 Cryptography is a method of using encryption and decryption to secure communication in the presence of third parties with ill intent—that is, third parties who want to steal your data or eavesdrop on your conversation. Cryptography uses computational algorithms such as SHA-256, which is the hashing algorithm that Bitcoin uses; a public key, which is like a digital identity of the user shared with everyone; and a private key, which is a digital signature of the user that is kept hidden.

In a normal bitcoin transaction, first, there are the transaction details: whom you want to send the bitcoins to and how many bitcoins you want to send. Then the information is passed through a hashing algorithm. Bitcoin, as mentioned, uses the SHA-256 algorithm. The output is then passed through a signature algorithm with the user’s private key, used to uniquely identify the user. The digitally signed output is then distributed across the network for other users to verify. This is done by using the sender’s public key.

The users who check the transaction to see whether it’s valid or not are known as miners. After this is done, the transaction and several others are added to the blockchain, where the details cannot be changed. The SHA-256 algorithm looks something like in the image below. 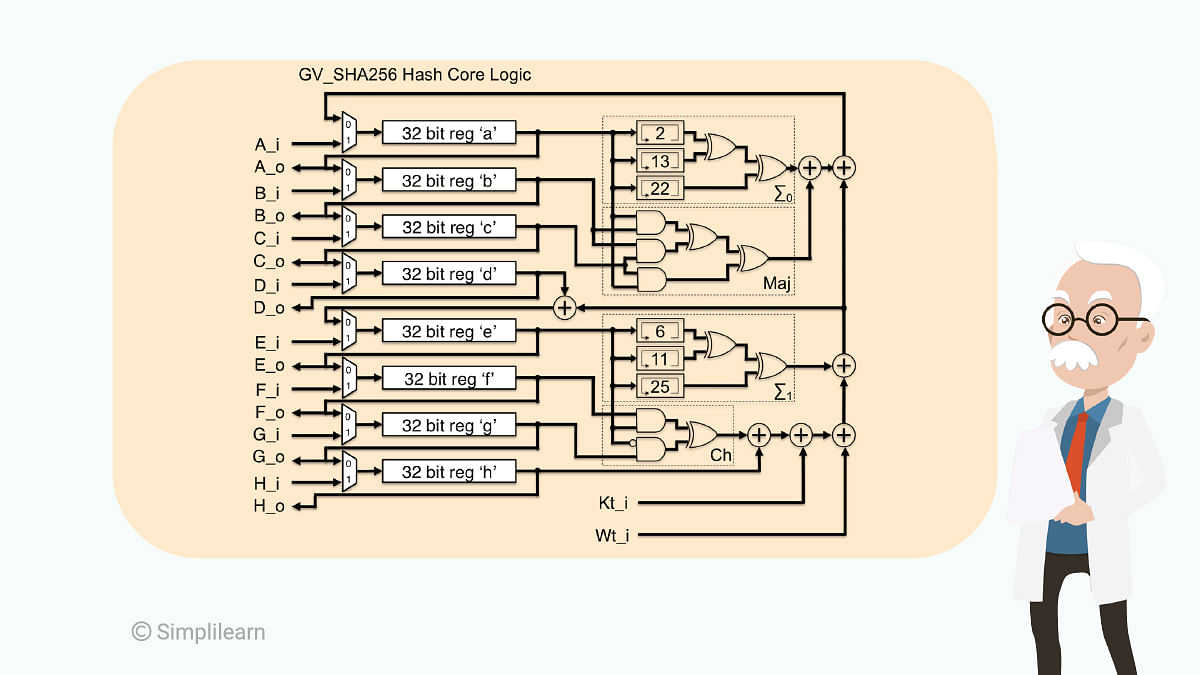 You can see how complicated it is, meaning it’s safe to say that encryption is very difficult to hack.

You now know that Bitcoin is a digital currency that is decentralized and works on blockchain technology and that it uses a peer-to-peer network to perform transactions. Ether is another popular digital currency, and it’s accepted in the Ethereum network. The Ethereum network uses blockchain technology to create an open-source platform for building and deploying decentralized applications.

Bitcoin and ether are the biggest and most valuable cryptocurrencies right now. Both of them use blockchain technology, in which transactions are added to a container called a block, and a chain of blocks is created in which data cannot be altered. For both, the currency is mined using a method called proof of work, involving a mathematical puzzle that needs to be solved before a block can be added to the blockchain. Finally, both bitcoin and ether are widely used around the world.

There is a limit to how many bitcoins can exist: 21 million. This number is supposed to be reached by the year 2140. Ether is expected to be around for a while and is not to exceed 100 million units. Bitcoin is used for transactions involving goods and services, and ether uses blockchain technology to create a ledger to trigger a transaction when a specific condition is met. Finally, Bitcoin uses the SHA-256 algorithm, and Ethereum uses the ethash algorithm.

The Future of Cryptocurrency

The world is clearly divided when it comes to cryptocurrencies. On one side are supporters such as Bill Gates, Al Gore and Richard Branson, who say that cryptocurrencies are better than regular currencies. On the other side are people such as Warren Buffet, Paul Krugman, and Robert Shiller, who are against it. Krugman and Shiller, who are both Nobel Prize winners in the field of economics, call it a Ponzi scheme and a means for criminal activities.

In the future, there’s going to be a conflict between regulation and anonymity. Since several cryptocurrencies have been linked with terrorist attacks, governments would want to regulate how cryptocurrencies work. On the other hand, the main emphasis of cryptocurrencies is to ensure that users remain anonymous.

Futurists believe that by the year 2030, cryptocurrencies will occupy 25 percent of national currencies, which means a significant chunk of the world would start believing in cryptocurrency as a mode of transaction. It’s going to be increasingly accepted by merchants and customers, and it will continue to have a volatile nature, which means prices will continue to fluctuate, as they have been doing for the past few years.

That wraps up our cryptocurrency tutorial. If you’d like to learn more about blockchain (the underlying technology of cryptocurrencies such as bitcoin), check out our video section.

If you have any questions about the article “what is cryptocurrency”, please ask your questions in the comment section below. Our experts will get back to you at the earliest.

To gain a comprehensive understanding of the various aspects of cryptocurrency investing, it’s important to consider both fundamental and technical analysis. For more information on fundamental analysis, be sure to check out our guide on the subject. Similarly, for more information on technical analysis, check out our guide on the topic. By understanding both of these key concepts, you’ll be well on your way to making informed investment decisions.

1. How Do You Buy Cryptocurrencies?

2. What Is the Point of Cryptocurrency?

Anyone can send and receive money anywhere, using the peer-to-peer payment system. In the real world, cryptocurrency transactions are not carried around and exchanged as tangible money but as digital entries to an online database that identifies specific transactions. The benefits of cryptocurrencies include cheaper and quicker money transactions and decentralized systems that do not fail at a single point.

3. Can You Generate Cryptocurrency?

Anyone may establish a cryptocurrency, but it takes time, money, and other resources, as well as extensive technical skills. The primary possibilities are creating your own blockchain, modifying an existing one, creating a coin on an existing one, or hiring a blockchain engineer. The cost of bitcoin production ranges from $10,000 to $30,000, depending on the chosen option.

4. What Are the Most Popular Cryptocurrencies?

Consider Ravencoin, Ethereum, and Bitcoin to purchase today and retain forever. Due to their volatility, cryptocurrencies are best suited for those that can tolerate risk. For these investors, investing in the leading cryptocurrencies now, while the market is unreliable, may pay off in the long term. One of the biggest cryptocurrency exchanges in the world, Binance, has its own coin called BNB. Although Binance Coin was first designed as a token to pay for reduced transactions, it is now being used to make payments and buy a variety of goods and services.

On the Chicago Mercantile Exchange, the world’s largest and most complex financial market, crypto derivatives like Bitcoin futures are offered. According to the Securities and Exchange Commission (SEC), Ethereum and Bitcoin are not securities.

6. How do cryptocurrencies work?

7. How to invest in cryptocurrency?

8. What are the key steps to buy cryptocurrency?

Step 2: Open a trading account and confirm your email. Connect your phone now.

Step 3: Verify your identification in step three. Fund Your Account next.

Step 4: Purchasing and Investing in Cryptocurrency.

Step 6: Choose a strategy in the last step.

9. What is the minimum amount you can invest in cryptocurrencies?

10. Can cryptocurrencies be used to make online purchases?

Definitely, despite the fact that cryptocurrencies are not a commonly utilized payment option, a number of businesses have started to accept them in return for their goods and services. Online purchases are increasingly being made using cryptocurrencies. According to Wagner, a number of merchants now accept Bitcoin. You may shop on Overstock.com to buy furniture for your home with cryptocurrency. You may even embark on a spending spree at Nordstrom, which also accepts Bitcoin from clients.

11. How Many Cryptocurrencies Are There?

12. What Are the Different Types of Crypto?

Bitcoin (BTC), Ethereum (ETH), Tether (USDT), USD Coin (USDC), and Binance Coin (BNB)  are some of the popular ones. 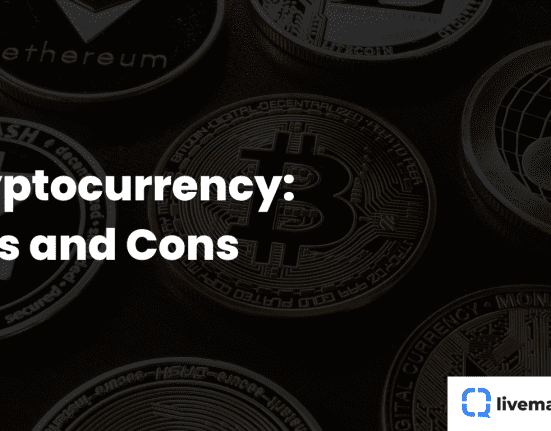